If your TLS 1.2 client or server supports RSA-MD5 signatures, then client authentication is broken, and server authentication may be breakable by a powerful adversary. (Note the signature algorithm is not related to the chosen ciphersuite; you may use ECDHE_RSA_AES_128_GCM_SHA256 and still be signing with RSA-MD5.) If your TLS application relies on the tls-unique channel binding to prevent credential forwarding, you need to redesign your application. If practical collision attacks on SHA1 appear, then many constructions in TLS, IKE, and SSH will be breakable. So, if you can afford to do so, get rid of MD5 and SHA1 in all your protocol configurations.

In response to recent high-profile attacks that exploit hash function collisions, software vendors have started to phase out the use of MD5 and SHA1 in third-party digital signature applications such as X.509 certificates. However, weak hash functions continue to be used in various cryptographic constructions within mainstream protocols such as TLS, IKE, and SSH, because practitioners argue that their use in these protocols relies only on second preimage resistance, and hence is unaffected by collisions. We systematically investigate and debunk this argument.

We identify a new class of transcript collision attacks on popular cryptographic protocols such as TLS, IKE, and SSH, that significantly reduce their expected security. Our attacks rely on the use of obsolete hash constructions in these protocols. The full details of our attacks are in the technical paper. This page summarizes our results and describes two concrete attacks on TLS: one on TLS 1.2 client authentication, and the other on the tls-unique channel binding used in various TLS-based authentication protocols like Token Binding, FIDO, and SCRAM.

Our main conclusion is that the continued use of MD5 and SHA1 in mainstream cryptographic protocols significantly reduces their security and, in some cases, leads to practical attacks on key protocol mechanisms. Furthermore, the use of truncated hashes and MACs for authenticating key exchange protocol transcripts is dangerous and should be avoided where possible.

Partly as a consequence of this work, the TLS working group has decided to remove RSA-MD5 signatures and truncated handshake hashes from TLS 1.3. We encourage TLS 1.2 implementations to disable MD5 signatures immediately and SHA1 signatures as soon as practical. We also advocate that tls-unique should no longer be used for channel binding in application-layer authentication protocols.

SLOTH is an acronym for the loss of security due to the use of obsolete and truncated hash constructions in mainstream Internet protocols. SLOTH is also a not-so-subtle reference to laziness in the protocol design community with regard to removing legacy cryptographic constructions. For example, MD5 signatures have been known to be cryptographically broken since at least 2005, but they continue to be used in TLS today, when collision attacks have become significantly more practical, even on standard desktop workstations. Furthermore, SLOTH is part of a series of recent attacks on the use of legacy crypto constructions including POODLE, FREAK and Logjam. We hope that these attacks will encourage the protocol community to proactively remove known-weak constructions, rather than waiting for concrete attacks to make it necessary.

SLOTH in TLS, IKE, and SSH

The following table summarizes the security losses (SLOTH) due to transcript collision attacks on well-known cryptographic protocols. In each protocol, we identify a protocol mechanism and a rough estimate of its expected security. For example, if a TLS server uses a 3072-bit RSA key for signing and supports SHA-256 as a hash algorithm, the expected security of server signatures is 128 bits. Even if the server supports MD5 signatures, since the 2nd preimage attack complexity of MD5 signatures is still 2128, one may expect 128-bit security for server signatures. However, in our paper, we describe a transcript collision attack on TLS server signatures that takes 264 connections, 264 storage, and 264 hashes per connection. Hence, the effective security is halved to about 64 bits. The security losses for other mechanisms such as TLS client authentication are even more dramatic, leading to practical attacks on real-world clients and servers.

An attack on TLS 1.2 Client Authentication

Suppose a TLS client C and server S both support RSA-MD5 signatures for client authentication, and suppose that the client is willing to use the same certificate to authenticate at some malicious server M. The figure below shows how M can mount a man-in-the-middle transcript collision attack that allows it to impersonate C at S. 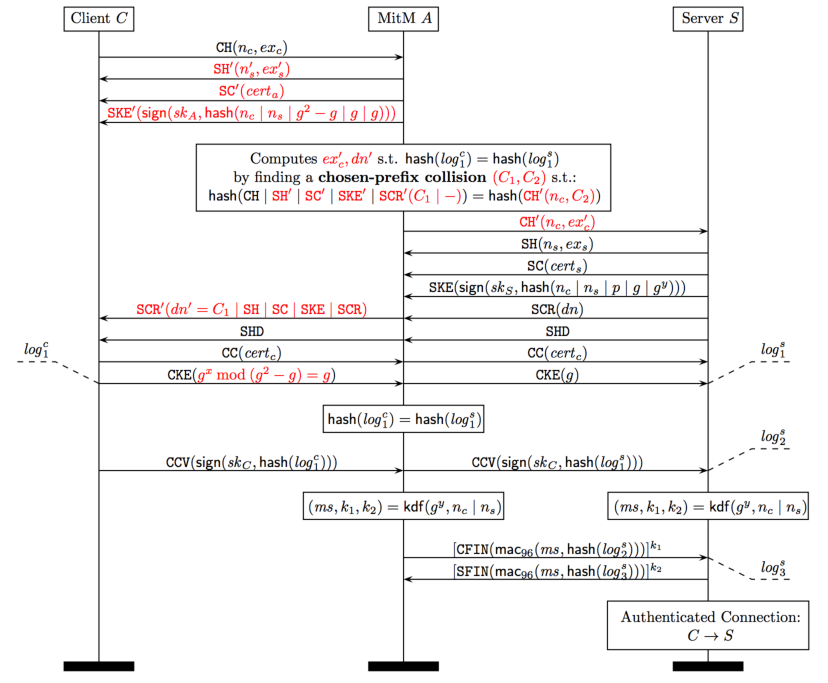 To accomplish this attack, the attacker M must compute a chosen-prefix MD5 collision between two handshake transcripts, one between C and M, and the other between M and S. The attack complexity depends on the difficulty of finding such collisions. For MD5, such collisions are known to require computing 239 hashes, which can be accomplished inseveral hours on Amazon EC2 instances.

We implemented our man-in-the-middle attack between a standard Java TLS client and a Java TLS server. We captured the handshake traces and modified them as shown in the figure above. We used the publicly available HashClash software (with some optimizations we implemented) to compute the MD5 collision needed to complete the attack. After our optimizations, computing the collision took only 1 hour on a workstation with 48 cores. We expect that this time can be significantly reduced using a full GPU implementation of HashClash, or custom MD5 hardware.

An attack on TLS Channel Bindings

The tls-unique channel binding is defined as the first Finished message sent in a TLS handshake. We observe that the TLS Finished message in all versions up to TLS 1.2 is computed as the HMAC, using a session secret, of the hash of the full handshake transcript. Importantly, this HMAC is truncated to 96 bits, even in TLS 1.2 where the transcript hash and the HMAC both use SHA-256. This use of a truncated hash enables a transcript collision attack as described below. 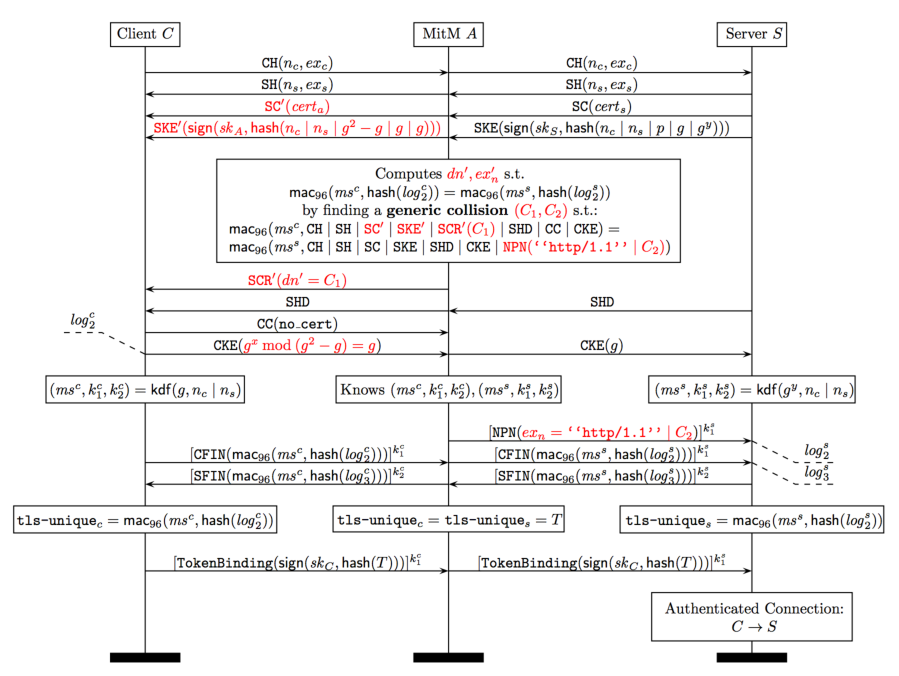 To accomplish this attack the attacker M needs to collide two ClientFinished messages, one between C-M and the other between M-S. Two key observations make this attack possible. First, the attacker knows the session master secret on both connections and hence can compute the MAC. Second, the attacker controls large parts of the transcripts in both directions and hence can try many values to obtain the collision. Since the HMAC is only 96 bits long, even a generic collision requires only about 248 HMAC computations.

We implemented our man-in-the-middle attack between a Google Chrome client and the Google.com TLS server. We captured the handshake traces and modified them as shown in the figure above. We implemented a TLS 1.1 Finished collision search algorithm for Nvidia GPUs (using the CUDA framework). Computing the collision took about 80 GPU days (20 days on a workstation with with 4 Nvidia Tesla GPUs). This work can easily be parallelized across more GPUs to arbitrarily reduce the computation time, and dedicated hardware would bring a significant speedup.

Impact on TLS 1.2 and 1.3 Server Authentication

To mount a transcript collision attack on TLS 1.2 server authentication, an attacker first has to collect a large number, say 2X, of RSA-MD5 signatures signed by the server. The attacker may do this by passively observing RSA-MD5 connections to the server, but since such connections may be rare, it may have to actively connect to the server to obtain a sufficient number of signatures. Once these signatures (and their hashed contents) have been collected and stored, the attacker can hijack any connection to the server by choosing a server random such that the hash of the attacker's key exchange message collides with one of the server signatures already collected. Finding this collision requires the attacker to compute up to 2128-X MD5 hashes and then look them up in the stored signature database.

The complexity of the attack on TLS 1.2 server authentication is therefore 2128-X MD5 hashes per connection, in addition to 2X connections peformed before-hand, and 2X storage. The attacker can trade-off between these costs---the more signatures he can collect, the less he has to compute per connection. For example, if it is feasible to collect 264 signatures, then the per-connection cost is 264 hashes.

In TLS 1.3, the server signature has been modified to cover the full handshake transcript. Consequently, the transcript collision attack becomes as practical as the attack on TLS 1.2 client authentication. That is, if a TLS 1.3 client and server were to support RSA-MD5 signatures, then a server impersonation attack can be mounted with about 239 MD5 computations per connection. Considering that server authentication is one of the main goals of TLS, this attack would have been devastating. Fortunately, in response to comments from TLS practitioners and researchers, and partly as a consequence of our work, all MD5 signatures have been disabled from TLS 1.3. However, in light of previous bugs in TLS libraries that allowed legacy crypto even after it was thought to be disabled, we warn that TLS implementations must take special care to ensure that MD5 signatures are not enabled in TLS 1.3 connections. Furthermore, we warn that the use of SHA1-based signatures in TLS 1.3 also reduces its security significantly, and should be quickly deprecated.

Our attack on MD5-based signatures affects all TLS clients and servers that support RSA-MD5 and ECDSA-MD5 (DSA is typically enabled only with SHA1). This protocol-level flaw in TLS 1.2 is covered by CVE-2015-7575. Here is the list of software known to be affected. This list will evolve as we gather more information.

Our attack on the tls-unique channel binding affects application-level protocols that rely on this channel binding to prevent credential forwarding attacks. In general, all uses of tls-unique are suspect, but the following are known to be specifically affected:

We are a pair of researchers from INRIA, the French national research institute for computer science. Our research is part of a wider effort on investigating the security of TLS and its implementations, called miTLS. You can contact us at our email addresses: [FirstName].[LastName]@inria.fr (use our names without any accents.)